2012 in Gulmarg saw a dodgy snow pack in January and with the decision to ski guide in Japan for this month (because of previous lack of snow and dodgy unstable snowpack in previous Gulmarg seasons) it proved a good decision that paid off. 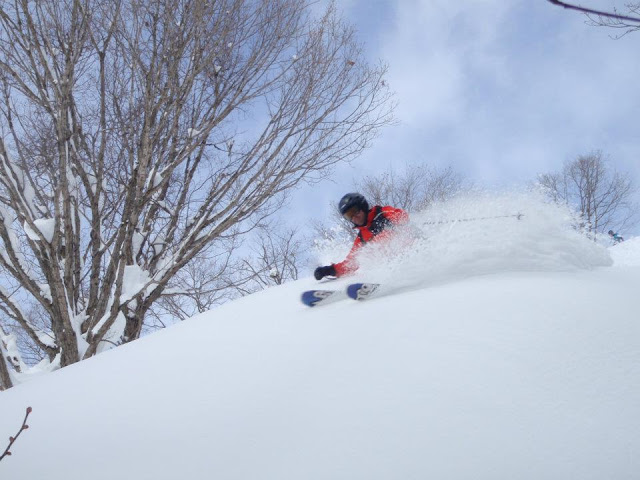 Getting the goods in Hakuba, Japan. Photo by Mitch. 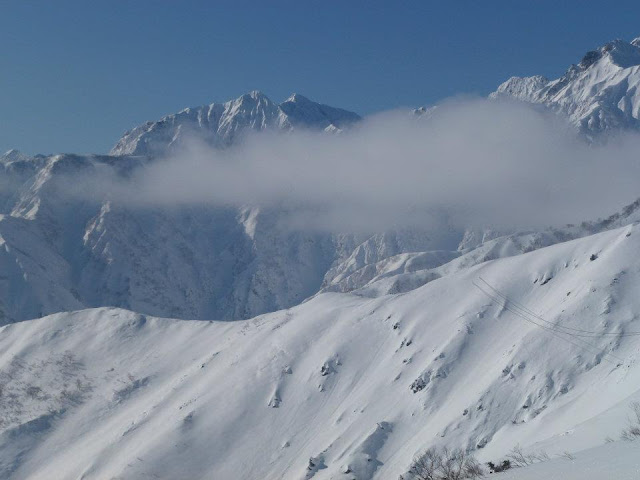 There's a lot of terrain in the Hakuba Backcountry to explore!
Photo by sunstone. 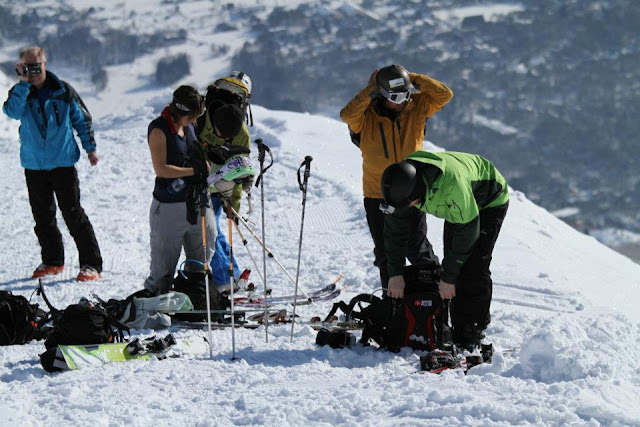 Gearing up about to ski the South Face Backcountry bowls in Hakuba, Japan.
Photo byJoona Olkkola 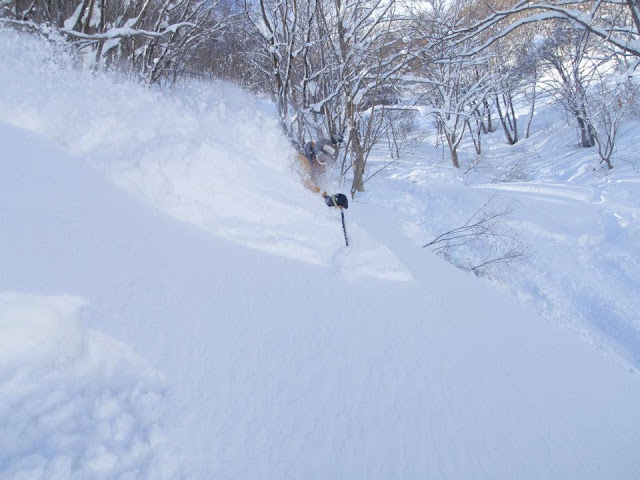 Paul gets in deep into the Japow! Photo by Mitch. 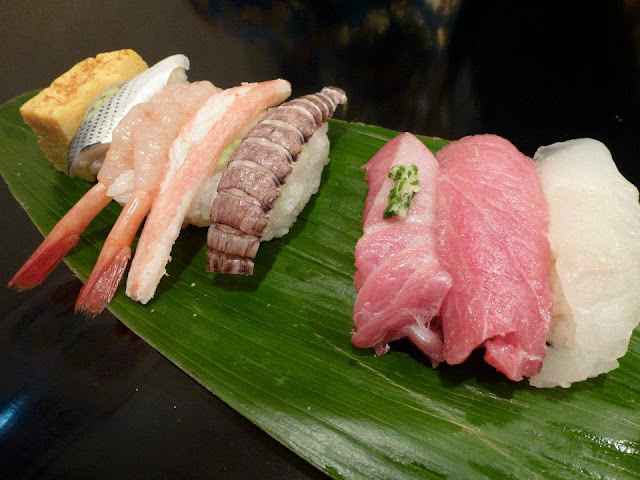 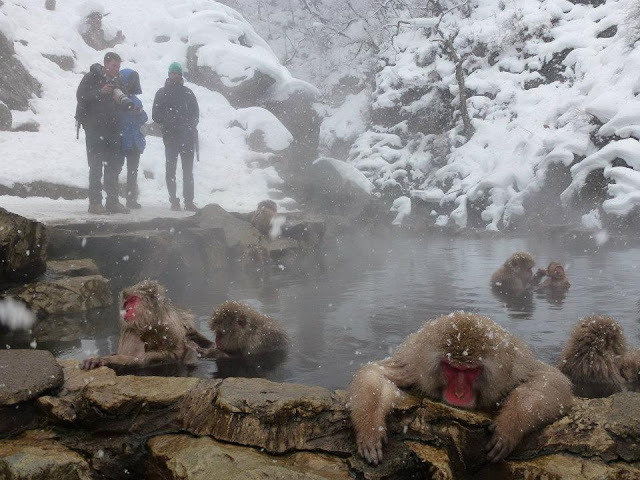 Snow monkeys - rather unique in Japan! Photo by sunstone.

We ran tours for clients to Gulmarg, Kashmir in Feb through March with superb powder conditions - as always! Some other guiding companies risked skiing the Shadowsland bowls in the South and saw them getting clients buried & injured - luckily there were no fatalities although there were some close calls! 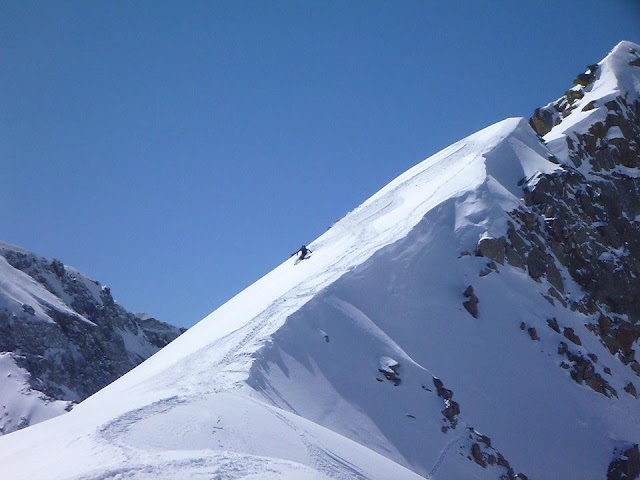 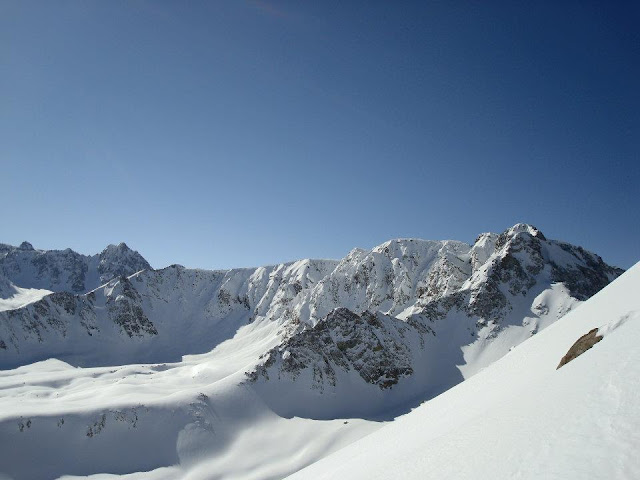 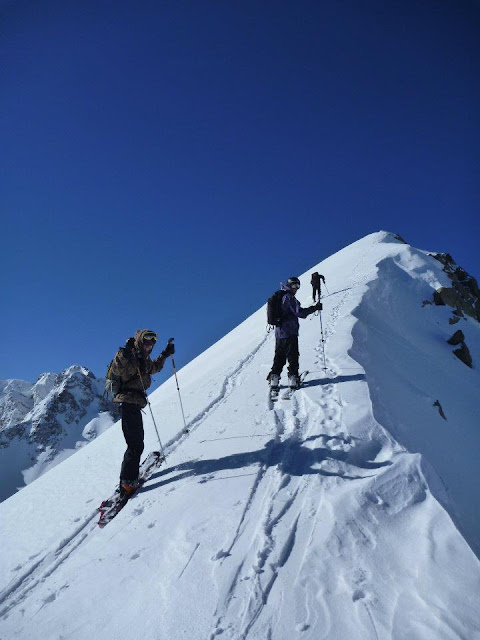 Paul leading up with Ted & Scotty in the Gulmarg, Kashmir backcountry. Photo by Robbie Richmond. 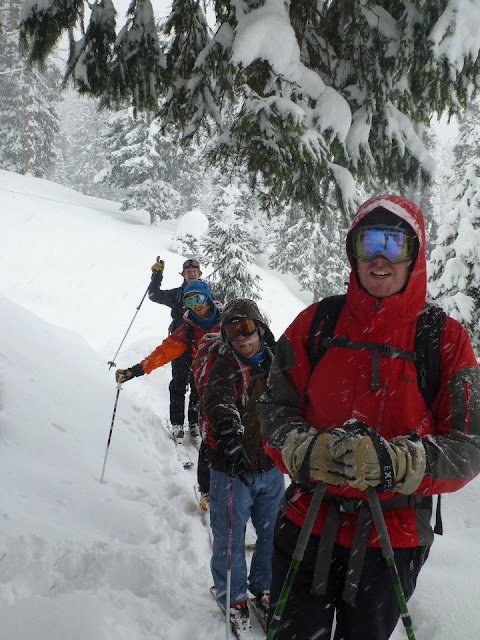 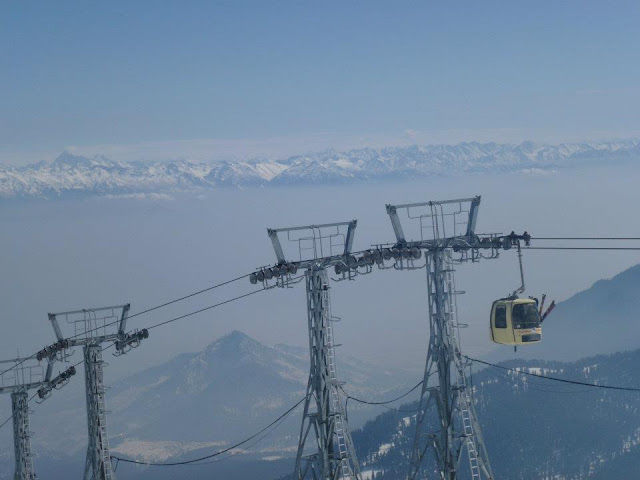 And it's not all skinning & hiking.....There's a really PHAT gondola that drops you at 4000m! Photo by sunstone. 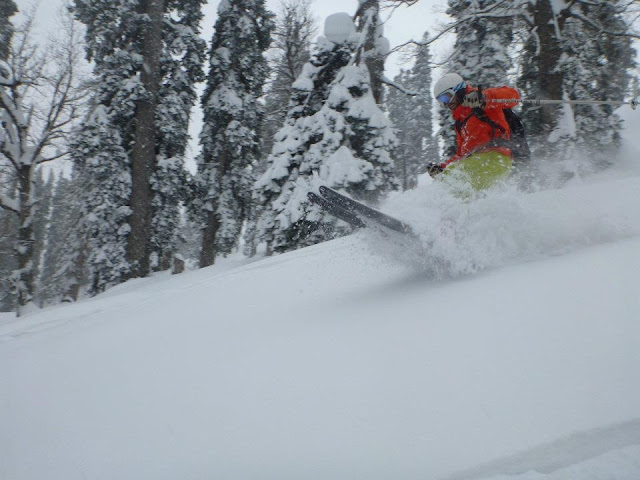 Eric boasting in the Powder. Pic by sunstone. 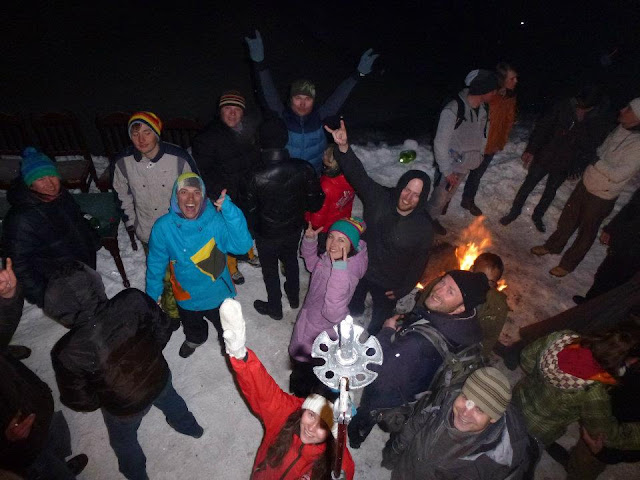 Party time. There's more partying in Gulmarg than you might expect! Pic by sunstone. 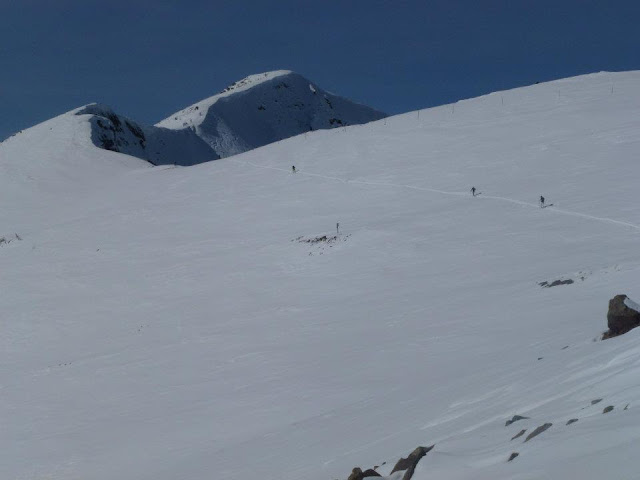 Heading out to the legendary 40-60 degree slopes of the 'Shark's Fin'! Pic by sunstone.

In this situation of high avalanche rish it's paramount to ski & snowboard lower angle slopes (below 30 degrees), stick in areas with good snow anchors (like trees) and on lower elevations. There's still plenty of great options in the Gulmarg area to avoid High Risk Avalanche areas and that's why its such a great ski environment. 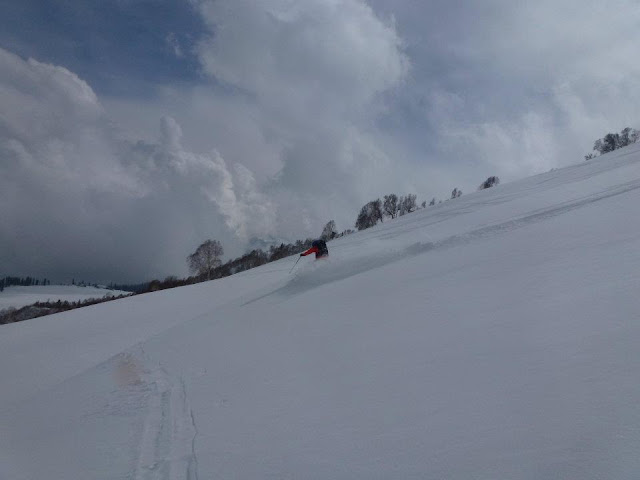 Phil has his turn coming out of the 'Singing Tree'. Photo by sunstone. 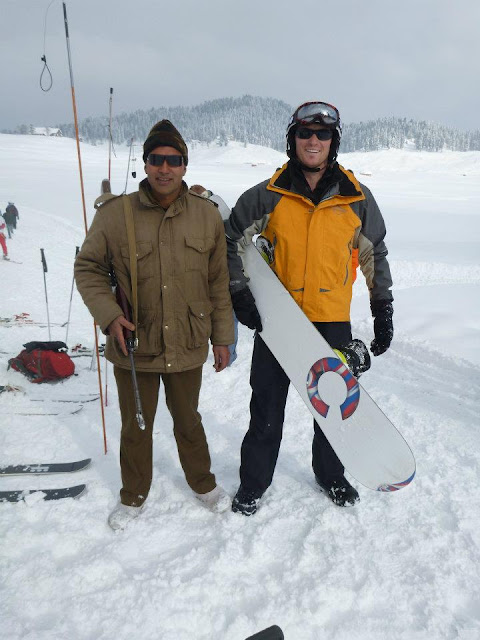 Travis mixes it up with local army. Photo by sunstone. 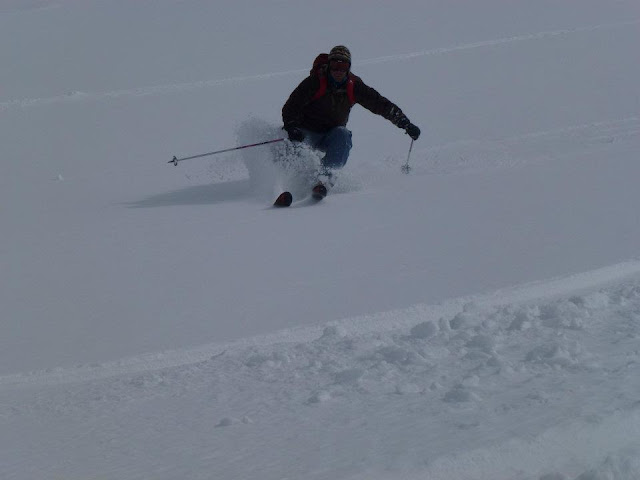 
It was another epic ski season and we were happy to report NO clients in avalanches and NO fatalaties - a record we have maintained since we started our ski guiding operations 5 years ago - a 100% client safety record which we're very proud of! 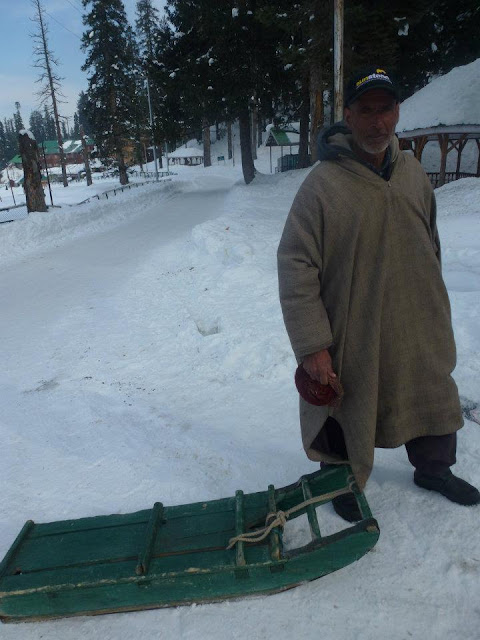 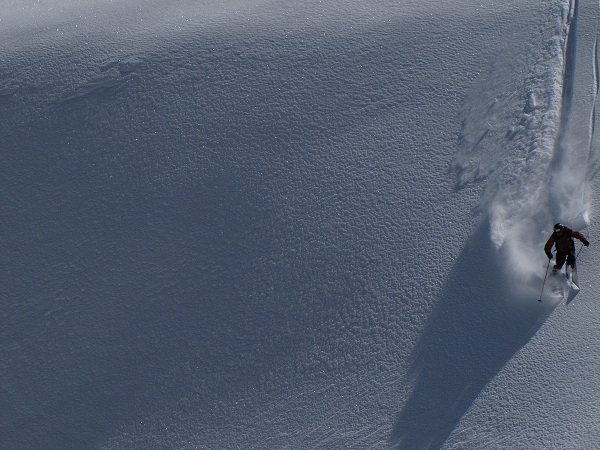 About to drop into fields of powder. Photo by Jonas Scherer.

Here's what some of our clients said about sunstone adventures this season:


"Skiing in Gulmarg weeks 9&10 in February/March 2012 with Sunstone Adventures was amazing! Our guide Paul knew the place, the skiing, the snow conditions, the food and the people, and shared all of this with us in a way that made us feel we were skiing with a friend. The deal covered B&B, transportation, guiding, so the only thing we had to decide was where to eat dinner each night. I was recommended Sunstone by a friend, and now it's my turn to recommend Sunstone! We are already looking to book for next time..."
Tea, Finland.


"A side from the awesome skiing, it was the organization of our stay as a whole - professional, yet casual and personal, with a dedication to make sure we got as much as possible out of our stay, including the best available skiing according to conditions as well as seeing the local sights and cuisine and getting to know people. In fact many times it felt like hanging out with old friends."
Mans, Sweden. 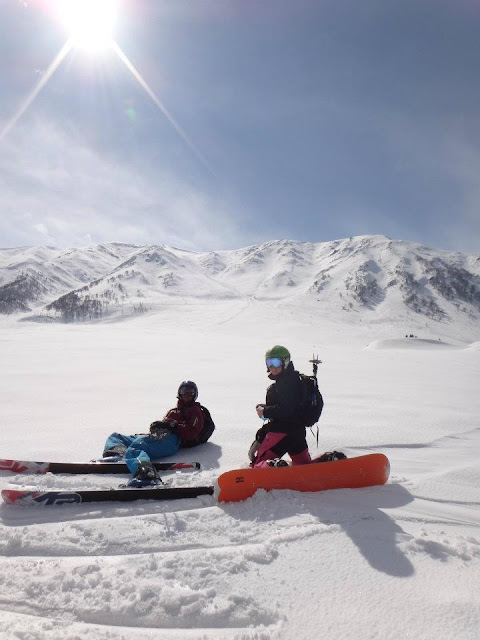 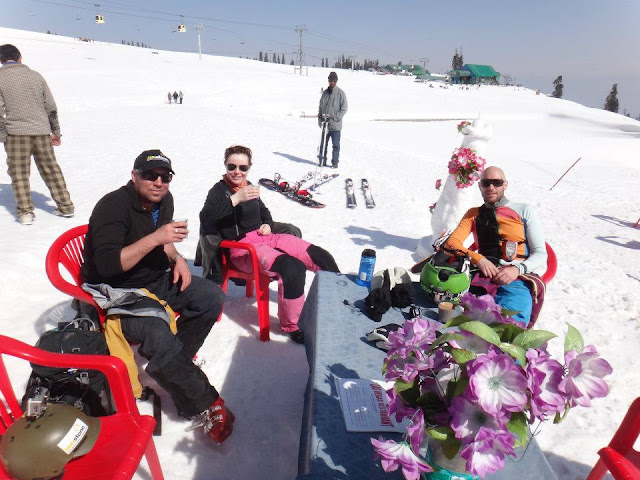 "Gulmarg is such a loose and wild yet relaxed place, and Sunstone Adventures was a perfect match. Paul is all of those things, but also timely, knowledgable and professional. Paul's, safety considerations are always apparent and at no stage did we feel exposed to any unnecessary or unexpected risk. It was an extremely cost effective service which was invaluable due to the possibility of avalanches, the language and cultural barriers and other "unique" peculiarities of the area. An absolute must for any skiers or boarders touring the area for the first time."
Liam, Australia 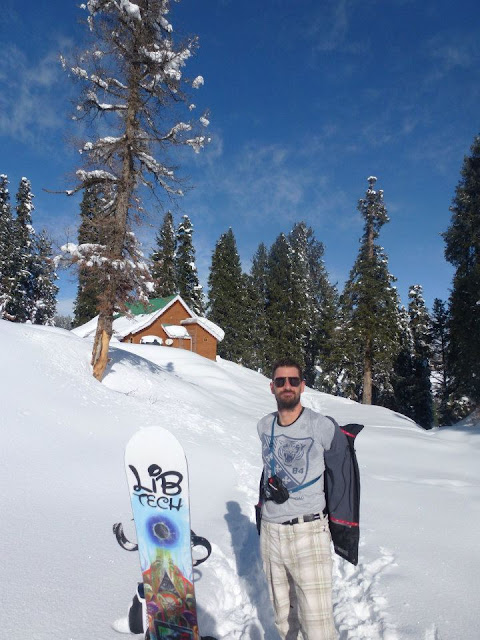 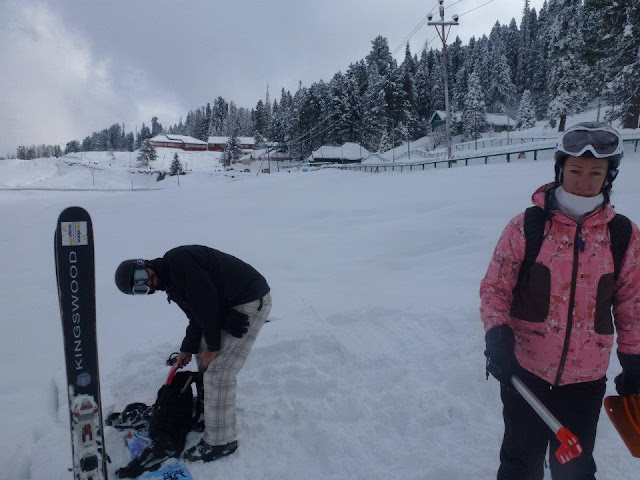 "Great service! Gulmarg is a tough place to arrange things especially if you haven't been there before. Paul gave us the full run down of the place before we came and made it really simple and easy for us to get set up with accommodation, guided us around the mountain and organised airport shuttles etc, very easy and stress free. Cheers Paul"!!
Tim, New Zealand. 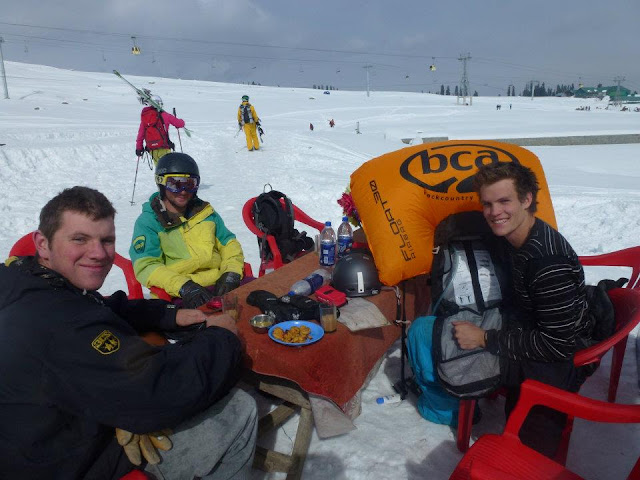 And thanks to all our awesome clients for making it another special season - super fun and of course just epic skiing & snowboarding at exotic locations! 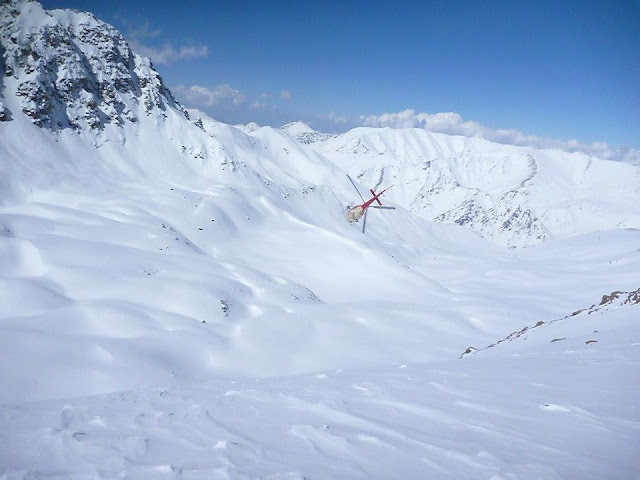 Sunstone was also lucky to be a part of filming the new Gulmarg promotional ski & snowboard film to promote tourism in the Kashmir area by the Jammu & Kashmir Tourist Board. Thanks to film maker Will Lascelle and all the riders, Gulmarg Heliski operation and a great day of dropping steep powder lines in the Himalayan backcountry while being showered with sunshine!

Check out a video preview of the footage skiing the Sunshine Peak area in Gulmarg, Kashmir:

So what's up next for sunstone?

Come get in the mix with sunstone!