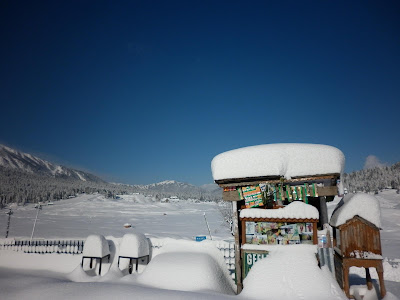 Finally 60-70cms of snow arrived in Gulmarg, Kashmir on 13th & 14th January with it clearing for two superb bluebird powder days on the 15th & 16th!
Before this dump it was pretty damn slim pickings, with a 60cm fall around the 2nd of Jan which fell on NO base, before this the only fall was back in November which had left little reminence of anything. 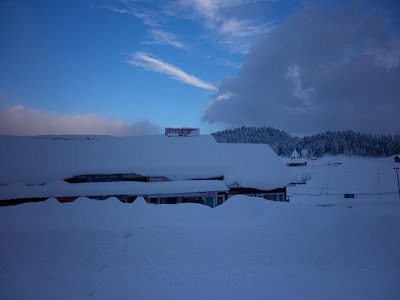 So it was finally game-on with Sunstone client Bryan Morris using some of the skinning skills we’d practiced on Mary’s Shoulder alongside some crucial avalanche training previous to the big dump arriving. With the recent snowfall Bryan Newman (Avalanche Forecaster) had made it clear that it was falling onto a ‘rotten’ snowpack’ and in reality we needed a really big, heavy snowfall to ‘flush out’ this predominant weak layer. In essence this hasn’t happened but after avalanche control work, bombing the Main Bowl there were no controlled releases as we skied across dirty bomb pits in beautiful waist deep powder. There has been some signs of activity with the slope opposite Mary’s Shoulder (below the gondola, 100m from start of the mid-station) sliding and South-West face of the Main Bowl below Army Ridge ripping out also. Avalanche advice is ‘High Risk’ for the Alpine Areas and ‘Moderate Risk’ for Below Tree Line'. 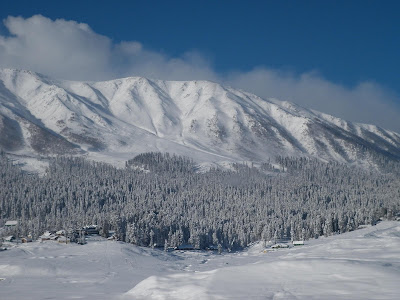 A gorgeous couple of bluebird days, firstly ‘Skinning the Monkey’ doing laps on Monkey Hill with all the skiers with Alpine Touring gear contributing to a couple of superb skin tracks making for lovely ascents up through the forest. The next day, again was a lovely start skinning up the Monkey Hill ridge from the Police Station and dropping in a steep & deep line – a great way to make your way from the market to the gondola. Once at the gondola we hooked up with Mad South African Sean for a couple of laps on Phase 1, some nice turns down the ‘shirt-front’ and some wiggling down some gullies milking the mellow but fun fresh pow pow. Rumours were aghast that Phase 2 would indeed open for 2pm, we weren’t holding our breaths but as always in Gulmarg you have to ‘hedge your bets’ and hang around on the off chance. After lunch it seemed it wouldn’t run but the sounds of the bomb squad doing their thang sounded promising. Bryan Newman always tries hard to at least get it open late for 1 or 2 golden runs and after another quick run on Phase 1 the call was ‘OPEN’. The few who had the tenacity and/or patience to hang around were rewarded with sweet waist deep powder in perfect visibility and calm conditions! 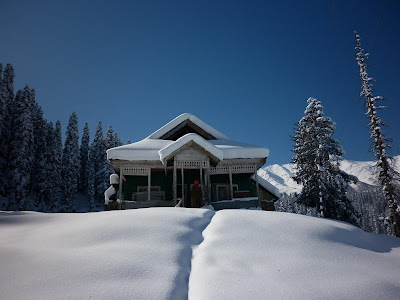 Bryan (Sunstone Client) was stoked and we both thanked the Newman for getting it open and finally getting at it. Down for a beer in the sun at the market and a great feed of butter chicken, garlic naan, Ginger/Garlic Chicken with mixed Vege and a few yarns from sean washed down by some Kingfisher Premium finished off a superb varied day. The season has officially opened and another huge storm forecast for Friday could bring more epicness! Sweet as :-):-):-) 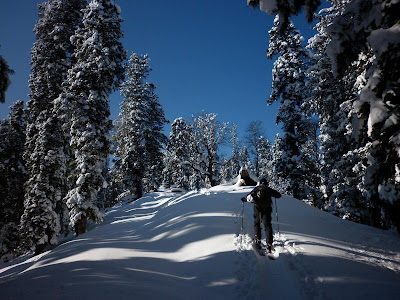 On the way to Gulmarg, Delhi & The Taj Mahal 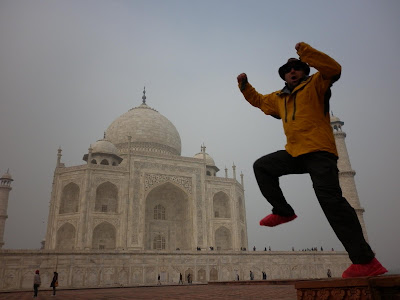 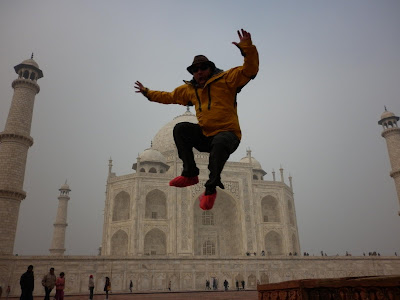 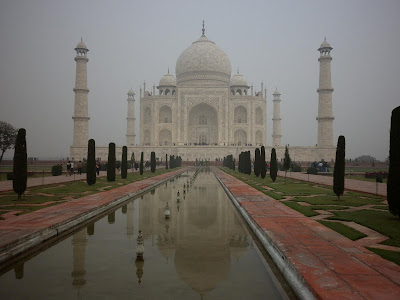 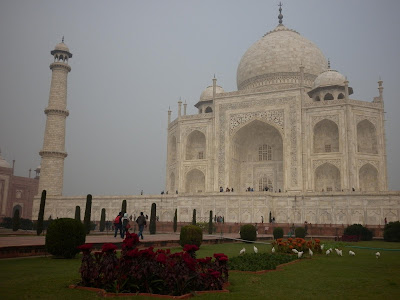 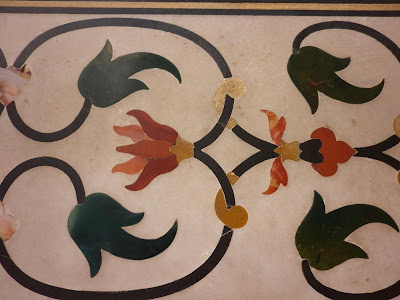 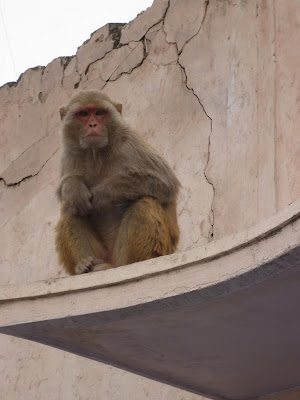 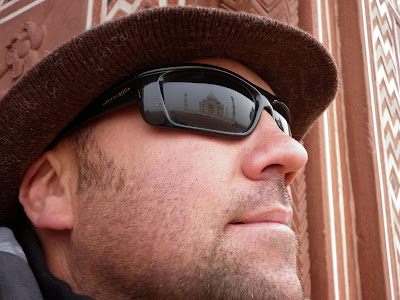 Arriving in Delhi after not such a good start at christchurch airport with emirates trying to charge excess backage of $800NZD. Normally I get away with the ski & mountaineering gear. Often throwing in that it's safety gear to get the sympathy vote and talking my way around things ;-) I guess in the past 18 months the airline industry has really tightened its belt and is gaining extra revenue from where ever it can! But what about a fat tax? Is it time for that? Overweight people having to cash up in lieu of luggage? Long are the days gone that you can expect a sporting allowance.

So the best option is to air freight my ski bag, with time on my hands, not having my first client for skiing up in Gulmarg, Kashmir until 10th of January it may make it in time - this is however good old India.

A cost of 460 bucks but I'm happy to take the hit and it means the 50 new sunstone gulmarg t-shirts will get over there.

Arriving late in the evening to cold Delhi I take a prepaid taxi (390 rupees) into main bazaar where all the cheap backpacker accommodation is situated, and it's conveniently placed in between the city metro and New Delhi station. I awake to NYE day and head to Metrpolis (founded 1928) this is one of the more celubrius eateries with great food and service. A few beers and who turns up but Aussie snowboarder Neil from Gulmarg - his cohort Kiwi Tim soon joins us after flying in from Bangkok and we plan dinner and beers! A good night ensue with more beers at club India and the guys head in as they're booked on an early flight the next morning. I continue on and hook up with some lovely Irish girls, some dancing with the locals and the night is done - welcome 2011!

So by tracking my freight I can see it's making its way to Delhi via Sydney and Singapore which should give me enough time to shoot down to Agra - and finally see the magnificent Taj Mahal, a trip I've been saving for a 'filler' that has presented itself.

I arrive by train, 7 hrs not 3 and am glad I am reading the superb 'girl with the dragon tattoo' and have some quality tunes on hand. We arrive around dusk and a quick tuk tuk to near the west gate and I'm at Shanti Guesthouse. In truth Agra is a shit hole and really only deserves 1.5 to 2 days of your time! The Taj Mahal really is mind blowing, an architectural marble (see what I did there) and they're right when
they say it is one of the greatest structures produced known to man.

The symmetry and detailed craftsmanship at such a scale is quite mind boggling and the camera gets a good work out! I'm picked up by a 9 year old boy who starts directing me around taking shots with my camera to great effect. He's got all the shots and as I'm traveling solo it's worth the 50 rupes I reward him for his 10 mins maybe not the 200 he further asks for, but as they say if you don't ask you don't get and I'm sure he's done over many gullible tourists in the past.

I take a tuk tuk and check out the remaining sites - Agra Fort, baby taj mahal, gardens opposite the taj and Akbar's tomb. I'm glad to see the back of Agra but not the Taj. Check out Joney's restaurant for good eats especially the Malai Kofta!

Back to Delhi and I do a movie at Connaught place (taking 1 stop, 8 rupees, metro from main bazaar) followed by a legendary Kathi Kebab at Nizam's around the corner. The next day it's lunch with Mike, a yank I met in Gulmarg in my first season who works in development as a Project Manager. Mike is now based in Delhi working for Real Medicine Foundation, as the programme seems to be up and running he continues to try and win more funding. Previous to this was 9 months spent in the field, with director Catlin recruiting 90 local workers taking 400 interviews to put the structure & process in place. Real Medicine provides treatment and medicine for needy, poor villagers in surrounding Madhya Pradesh region. They look to improve and help health processes in conjunction with the Indian government programmes. Check out: www.realmedicinefoundation.org

Further delays on my ski bag, oh well I have so much stuff 2 trips isn't going to be a bad thing - the 50 sunstone tees will ALL make it to Gulmarg!

www.sunstoneadventures.com
Posted by Sunstone Adventures at 23:39 No comments: